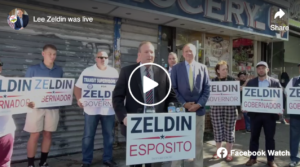 Zeldin and Pataki came together outside Williams Grocery in Inwood, the site of the recent murder of Queens native Rody Rivera.

“I am here today for one purpose, and that’s to proudly endorse Lee Zeldin as the next Governor of New York state. I love this state. I have lived here my whole life. I spent a large part of my life doing everything I could to make this state a better place. Not just part of the state, but all of the state, whether it’s Washington Heights, Buffalo, or Peekskill, New York. And I look around the state today and I see people doubting the future of this great state and they have good reason to doubt the future of this state. I look at this state and I have my doubts as to whether or not we’re going to be able to change things and get us headed in the right direction because I have no doubt today that New York state is headed in the wrong direction. That is something that not just I feel, not just Republicans feel. Republicans, Democrats, Independents, conservatives, liberals, all understand that this state is headed in the wrong direction. What does that mean? We need a change. We need a new Governor. A Governor who understands that its communities like this are the greatest victims of violent crime,” said former Governor George Pataki.