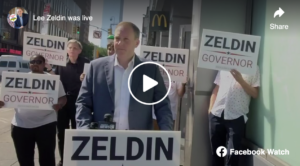 NEW YORK – On Monday, September 19, 2022, Congressman Lee Zeldin (R, NY-1), the Republican Party and Conservative Party Nominee for Governor, was at the Delancey Street McDonald’s in Lower Manhattan calling for a Special Legislative Session to overhaul cashless bail after a man who wielded an ax, shattering tables and walls and swinging at customers was released on cashless bail.

Congressman Zeldin and Alison Esposito have been calling for a Special Session in Albany to repeal cashless bail and give judge’s discretion on far more offenses to keep perpetrators detained or set bail. They have also been highly critical of District Attorneys who refuse to enforce the law, which has included Congressman Zeldin’s pledge to remove Manhattan District Attorney Alvin Bragg in January 2023.