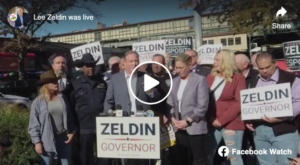 NEW YORK – Today, Congressman Lee Zeldin (R, NY-1), the Republican Party and Conservative Party Nominee for Governor, and his running mate Alison Esposito, held a press conference at the scene of yet another subway stabbing in the Bronx. Zeldin continued to call out Kathy Hochul for her refusal to recognize and address the crime crisis on New York’s streets and subways.

On Sunday morning, a man was stabbed in the neck inside Morrison Avenue-Soundview Subway Station. According to reports, at least six New Yorkers were attacked on the New York City Subway between Sunday and Monday.