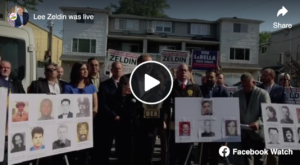 Congressman Zeldin is advocating for an overhaul of the New York State Parole Board, proposing the following reforms to be implemented once he takes office as New York’s next Governor:

Congressman Zeldin’s proposals are part of his Secure Our Streets Plan for New York, which can be viewed at ZeldinForNewYork.Com/SecureOurStreets.