Zeldin Renews Call for Hochul to Agree to Debates 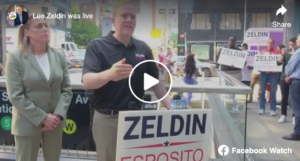 NEW YORK – On Friday, September 16, 2022, Congressman Lee Zeldin (R, NY-1), the Republican Party and Conservative Party Nominee for Governor, was joined by his running mate, Alison Esposito, calling for answers, an investigation, and government reform after Governor Kathy Hochul awarded an over $600 million no-bid contract to a top campaign donor and charged New York taxpayers over twice the going rate. Additionally, during today’s press conference, Congressman Zeldin once again called out Hochul for her continued refusal to accept any debate requests. Congressman Zeldin and Alison Esposito held their press conference outside the New York City Subway station at 59th Street and Lexington Avenue, in between legs of their travel today on the subway to speak to voters.