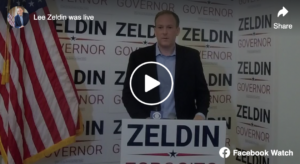 NEW YORK – Today, Congressman Lee Zeldin (R, NY-1), the Republican Party and Conservative Party nominee for Governor, doubled down on his challenge to Governor Kathy Hochul to join him on the debate stage for a minimum of five televised debates throughout New York prior to the general election. Congressman Zeldin has accepted multiple debates so far, including the first two requests he received from PIX11 and CBS2, while Hochul has failed to accept any, dodging questions from reporters on the topic again this weekend.