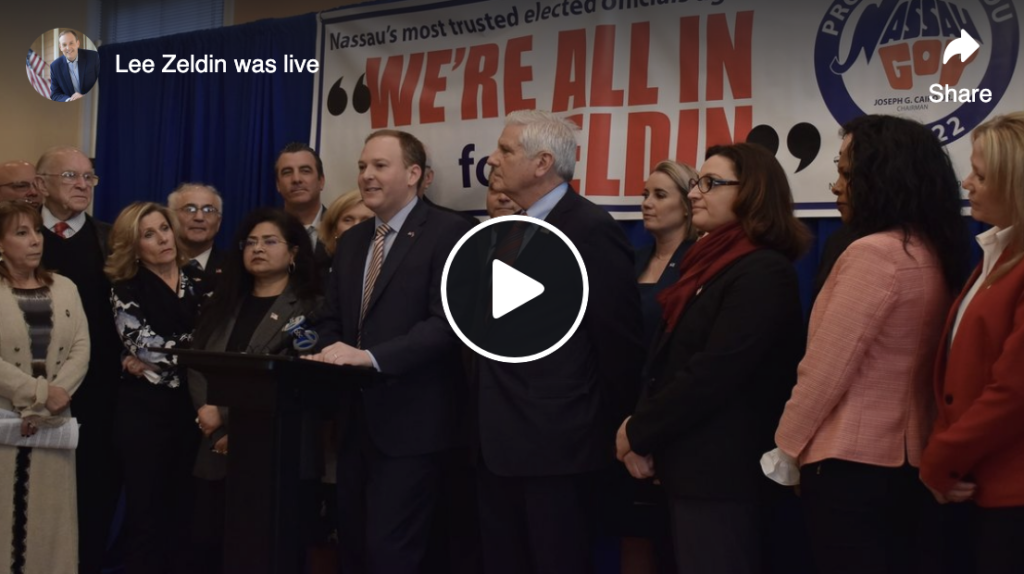 NEW YORK – Today, Nassau County Executive Bruce Blakeman was joined by over 40 local elected officials from throughout Nassau County in endorsing Congressman Lee Zeldin (R, NY-1), who has been declared the presumptive nominee by both the Republican and Conservative Parties, for Governor of New York.

“Congressman Lee Zeldin is the person who can save our state, keep families safe, preserve our quality of life and stop Albany’s runaway taxes,” stated Nassau County Executive Bruce Blakeman. “I support Lee in the strongest terms because he is the right choice for Governor.  There is too much at stake to continue along the extreme and dangerous path down which Governor Hochul is taking New Yorkers, which endangers our suburban way of life.”

“I stand with Lee Zeldin for Governor because the future of our suburbs is under siege,” said Town of Hempstead Supervisor Don Clavin. “Just a few weeks ago, the Governor hatched a scheme in her budget proposal that would do away with single-family home zoning across our state. Our families have worked too hard for their slice of the suburban dream of home ownership to allow the Governor to take it away with the stroke of a pen…I’m all in with Zeldin in 2022.”

Nassau Legislator Mazi Melesa Pilip said, “Keeping neighbors safe is one of the most important responsibilities of our state government. It is very worrisome for me as a public official and the mother of seven children that Governor Hochul supports the extreme bail reform laws that have turned loose drug dealers, gang members and killers onto our streets.  I know that Lee Zeldin will reverse bail reform and keep my family safe as Governor. That’s why I am endorsing Lee Zeldin.”

“As a former State Senator and Nassau’s Comptroller, I have fought against runaway taxes in New York State,” said Nassau County Comptroller Elaine Phillips. “The $1 billion dollar commuter tax, euphemistically called ‘congestion pricing’ by Governor Hochul, was approved during her tenure as Lt. Governor. It helps to balance a bloated budget on the backs of Long Island drivers, it will drive away business, stall an already battered economy and burden taxpayers in the most regressive manner, giving no consideration to ability to pay. I know that Lee Zeldin will stop the out-of-control spending and taxes that have characterized Hochul’s tenure in Government. I am with Lee.”

“While the Governor claims that she is not for defunding the police, her actions say just the opposite,” announced Rich Nicolello, Presiding Officer of the Nassau Legislature.  “She selected a Lt. Governor who is an unapologetic proponent of defunding the police and she just appointed a deputy secretary for intergovernmental affairs who is also an ardent ‘police defunder’. Lee Zeldin will keep us safe and he will never defund the police. We need Lee for a better and safer New York.”

“As a City Mayor, parent and former school teacher, I am glad that Congressman Lee Zeldin is fighting for parents’ rights,” said Glen Cove Mayor Pam Panzenbeck. “Even parents who support the use of masks for their children are outraged that the Governor has placed her governmental bureaucracy in charge of parenting decisions ahead of moms, dads and our children’s guardians. Lee Zeldin is standing with parents and that is why I am standing with him.”

“Lee Zeldin is a fighter, and that is what Long Islanders need now more than ever,” stated Assemblyman Ed Ra. “We need a proven leader who will stop runaway taxes, support the rule of law, back our police, say ‘NO’ to Hochul’s plan to eliminate single-family homes, and reverse her extreme bail reform laws, which have turned loose killers onto our streets. Lee fought for our freedom in the U.S. Military, and now he is fighting for the future of our state. Lee Zeldin is the only choice for Governor.”

“I am a mother, Councilwoman and a business owner,” concluded Councilwoman Laura Maier. “My business has been slammed by a Governor who is out-of-touch, my rights as a parent have been threatened by a Governor who has badly overstepped her authority, and our local government is doing the right thing for taxpayers while our Governor has abandoned residents of suburbia. I am backing Congressman Lee Zeldin for Governor because the very survival of the Empire State depends on it.”