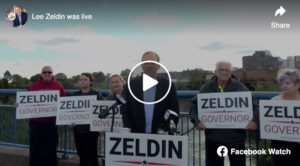 NEW YORK – On Thursday, September 29, 2022, Congressman Lee Zeldin (R, NY-1), the Republican Party and Conservative Party Nominee for Governor, in Rochester on the Pont de Rennes Bridge, called out Governor Kathy Hochul after she said she “would do that all again” when questioned about her $637 million no-bid contract she awarded to a campaign donor, which had New York paying twice the price of California for the same COVID tests from the same manufacturer.