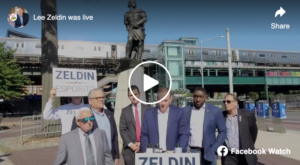 NEW YORK – On Wednesday, September 28, 2022, Congressman Lee Zeldin (R, NY-1), the Republican Party and Conservative Party Nominee for Governor, was joined by Attorney General candidate Michael Henry, U.S. Senate candidate Joe Pinion, Joseph DiPietro, the President of the Federation of Italian American Organizations of Queens and other local Italian-American community leaders to speak out against the push in Albany to change Columbus Day to Indigenous People’s Day. During last year’s Columbus Day, Governor Kathy Hochul signed a Proclamation on Columbus Day, declaring that day as Indigenous People’s Day in New York. Legislation was also just introduced in Albany to enact that change into law (A.10728, S. 2759).