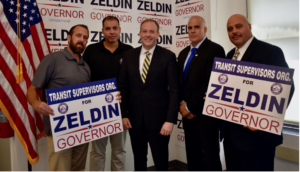 “New York is heading full steam into a downward spiral of crime, higher taxes, government overreach and overall uncertainty. Change is desperately needed and we need a leader now more than ever who can take over the helm and right the ship! Lee Zeldin is the right guy at the right time and just what New York needs,” said Transit Supervisors Organization President Philip Valenti. “As a Congressman from Long Island and a US Army veteran, Lee will make the tough decisions that need to be made and will stand up for us so we can maintain the rights and freedoms that all New Yorkers deserve and enjoy.”