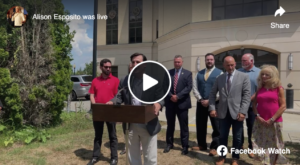 Ahead of the press conference, Alison Esposito toured local businesses in Carmel.