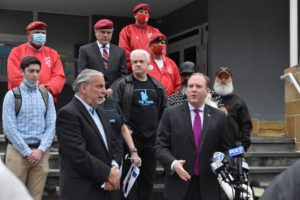 NEW YORK – On Thursday, April 29, 2021, Congressman Lee Zeldin, former New York State Assemblyman and founder of Americans Against Antisemitism Dov Hikind, founder of the Guardian Angels Curtis Sliwa and members of the Riverdale Jewish community came together in the Bronx at the Riverdale Jewish Center, one of the four local synagogues recently attacked.

Congressman Zeldin demanded justice for the local Jewish community as well as an end to cashless bail, the defund the police movement, and the targeting of Jews, which have undermined justice and failed to deter continued antisemitic attacks.

“New York politicians have undermined our brave police officers, cut off our justice system at the knees and then fanned the flames of antisemitism by targeting the Jewish community throughout the outbreak of coronavirus,” said Congressman Zeldin after the press conference. “These recent attacks aren’t isolated incidents. We’ve witnessed time and time again those who have committed antisemitic attacks set free thanks to cashless bail and go on to immediately attack again. There must be justice in these cases, but also substantive policy changes that put an end to the Jewish community’s bad case of deja vu.” 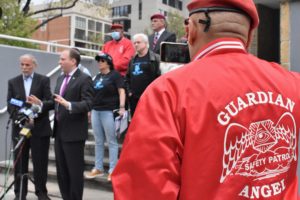